Last week the Underwater Film Festival took place in Cornwall for the first time. It was a fantastic celebration of our oceans featuring incredible underwater imagery from a variety of talented professionals and students. 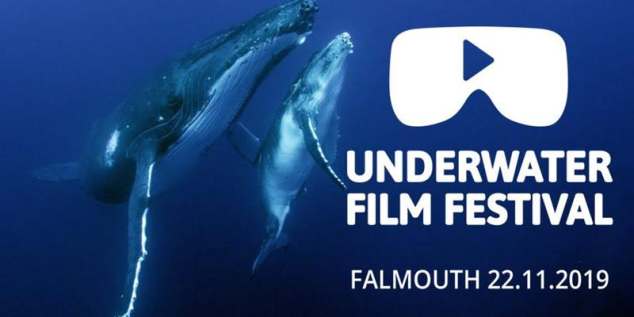 The Underwater Film Festival 2019 was the second annual event, organised and sponsored by dive clothing company Fourth Element, to help celebrate professional and emerging underwater film makers. It took place over two dates, firstly returning for a second time to Zurich on 18th October before making its debut in Falmouth on 22nd November. I was lucky enough to attend the Cornwall show hosted at Penryn Campus, the shared campus of Falmouth and Exeter universities. Which was hosted by Fourth Element director Jim Standing and organised in conjunction with the university’s marine research group Exeter Marine. It featured a collection of short films by professional filmmakers and talented university students, as well as a photo competition and guest speakers discussing their own careers in the industry. The event was very well received by the sell-out crowd in the campus’s Old Chapel lecture theatre and was thoroughly enjoyable for ocean lovers of any age or background.

The event began with a collection of short films written, produced and starring students from both Exeter and Falmouth universities. Exeter Marine’s Dr Annette Broderick said it was a “great pleasure that the event showcased students” and they certainly did not disappoint. The first film by Ellie Stones was titled ‘Co-existence’ and featured the amazing array of marine life that live in Falmouth’s bustling marina. It brilliantly highlighted how many species successfully live alongside humans despite our disruptive presence and encouraged us as viewers to be more aware of this and appreciate them. It was followed up by a compilation showcasing the work of Exeter alum Billy Heaney and the rest of the student led Muddy Duck productions team. Which included conservation work by Exeter Marine in Northern Cyprus and closer to home by the Cornwall Seal group.

The next student film was a personal favourite titled ‘Seas of Green’ by Ellie Marsh which highlighted the value of seagrass meadows. Filmed by divers just off the coast this fantastic production showed us just how many species rely on these habitats including squid, crabs, catsharks, pipefish, seahorses and anemones. As well as the key role seagrass plays in absorbing CO2 and fighting climate change. It was funny, beautifully filmed and most importantly very informative and educational. The final film came from Tom Daguere and was titled ‘Colour Creates the Light’. This incredibly interesting short was comprised of up-close shots and time lapses of some of the oceans most colourful and bizarre creatures. Accompanied by an upbeat electronic score which perfectly paired with the stunning imagery to create a surreal visual trip.

After all of these amazing films were shown host Jim Standing summed up what we were all thinking by saying he was “impressed by the incredible array of talent” shown by the students. Who not only showed off their own ideas, but also the variety of amazing marine life and habitats that can be found right off the coast in the UK.

Following on from the very impressive student showcase was a selection of different films produced by some of the industry’s biggest names. First up was one by the amazing Jill Heinerth, who is the explorer in residence of the Royal Canadian Geographical Society. Her new film ‘Under Thin Ice’ looked at the loss of ice coverage in the Arctic as a result of climate change. Travelling through Canada and Greenland her team looked above and below the shifting ice at how marine life was being effected. Not only did it have a strong and powerful message but it also featured some great shots of beluga and bowhead whales, narwhals, seals and polar bears.

We were also shown two short films by the Behind the Mask production company set up by well renowned film maker Florian Fischer. The first was titled ‘Sentinel of Solitude’ and featured several divers as they got up close and personal with an enormous crocodile. Followed up by ‘Orca Kingdom’ which featured a group of divers in Norway and their emotional encounter with a pod of killer whales. Both films were fantastically shot and showed us a different side to these deadly marine predators.

The final film shown on the night was ‘Whales & Dolphins’ by Howard Hall who has spent over 50 years at the forefront of underwater film making. This beautiful compilation of cetaceans showed off his trademark use of cutting edge technology to produce unrivalled high definition shots. Which were accompanied by a moving score which included the songs and clicking noises of the variety of species featured. It was a fitting end to a great programme of underwater films.

As well as watching all these fantastic films those in attendance were also treated to two industry experts who gave us some engaging talks alongside examples of their own work. The first of these was John Boyle from Shark Bay Films who talked us through a selection of films he had been involved in. He started off by showing us a never before seen clip of basking sharks courting behaviour in the Irish Sea and followed up with a sequence on blue sharks filmed off the Lizard in Cornwall. He told us that these clips demonstrated that the UK has an abundance of important shark species and that he was passionate about highlighting this in his work. Afterwards he also showed us a couple of trailers from his recent films set further afield, featuring footage from Truk Lagoon in Micronesia and the Sea of Cortez in Mexico. Both of which demonstrated his pedigree as a top underwater film maker.

Later on in the event we were also given a talk by Falmouth University lecturer Joe Stevens about what goes into making underwater films. Joe has worked on natural history films such as Galapagos and Blue Planet II and now passes on his knowledge to the students on Falmouth’s new Marine & Natural History Photography course. He began by showing a sequence from Blue Planet II where octopuses in South Africa were shown to be fighting off sharks and creating their own armour out of shells. Joe told us that it is these ‘never before seen’ behaviours that are the real currency of wildlife film making. He then went on to explain how shots like these required months of development and planning from the initial ideas to properly capture. This was demonstrated by a behind the scenes clip from the show where a local diver was involved in helping cameramen capture the shots. Joe’s talk was very informative and inspiring and gave everyone in attendance an idea of the hard work that goes into creating the films we were all enjoying so much.

For the first time this year the event also featured a photo competition run by Exeter Marine. Before the show began we had already been treated to a slideshow of the many fantastic entries featuring marine life in the local area. But in a break from the films the winners of the competition were also announced. These were picked by a panel of expert judges including Dr Andy Young from Exeter’s biosciences department, Jane Morgan a diving technician at Falmouth university and Saeed Rasheed who acts as an editorial consultant at DIVER magazine. Mr Rasheed addressed the audience to announce the winners as well as several commended images. The top three pictures and photographers, who all received a prizes in the form of Fourth Element gift cards, were as follows…

A big congratulation to these three photographers who were all deserving of their prizes and produced some exceptional images.

All in all the Underwater Film Festival 2019 easily delivered on its promise to highlight and celebrate our oceans through underwater film. Packed with engaging and educational films from a range of both professional experts and emerging talented students. All showing off a fantastic array of marine life from around the world and right on Cornwall’s doorstep. Every screening was met with a round of applause from the audience who regardless of age or scientific background could all enjoy what was on offer. Talking to several people after the show I was amazed at how every single person seemed to have their own personal favourite film or photo. A big congratulations to Fourth Element and Exeter Marine for putting on such a successful and well organised show at the first attempt. I look forward to hopefully attending again next year.

This is one of the many seahorses that live in Sweetings Pond, a saltwater lake found on the island of Eleuthera in the Bahamas. The seahorses here are the most densely populated in the world & they are also slowly adapting to their unique environment to become their own unique species 🌊🏝🇧🇸 Find out more via link below ⬇️ https://marinemadness.blog/2020/03/21/the-secretive-seahorses-hiding-in-a-bahamian-lake/ #seahorses #lake #eleuthera #bahamas #island #population #adaptation #evolution #oceans #marinelife #biology #uwphotography
These are the suckers from the arm of a giant squid! Researchers recently sequenced the genome for this elusive deep-sea creature for the first time. It is hoped the new genetic blueprint will help unravel some of the biggest mysteries surrounding giant squid & other cephalopods 🌊🦑🧬 Find out more via link below ⬇️ https://marinemadness.blog/2020/03/19/secrets-revealed-as-the-giant-squid-gets-genetically-sequenced/ #giantsquid #squid #genome #sequenced #genetics #dna #cephalopods #evolution #research #deepsea #oceans #marinelife #uwphotography
Is meddling with corals the key to their survival? New guest writer @eleanora_jane21 explores the role of assisted evolution in coral reef conservation. She talks us through what it is, why it’s needed & whether or not we should really be doing it at all 🌊👩‍🔬🤿 Full article link below ⬇️ https://marinemadness.blog/2020/03/17/assisted-evolution-is-meddling-with-corals-the-key-to-their-survival/ #coral #coralreef #evolution #helpinghand #climatechange #oceanacidification #coralbleaching #research #oceans #marinelife #uwphotography
This shipwreck now supports a small coral reef and hundreds of marine species, as it slowly degrades on the seafloor. This transformation from wreck to habitat is not possible without the abundance of microbes surrounding it. New research has shown the microbial communities surrounding sink vessels are more dynamic, spatially complex & unique than previously realised 🌊⛵️⚓️ Full article link below ⬇️ https://marinemadness.blog/2020/03/13/microbes-transform-shipwrecks-into-underwater-islands/ #ships #shipwreck #deepsea #seafloor #microbes #transformation #habitat #ecology #oceans #marinelife #uwphotography
A new study into shrimp brains has found structures called ‘mushroom bodies’ that were previously believed to be unique to insects. They help the crustaceans navigate their complex 3D environments in the same way as a bee or fly. The discovery also changes what we knew about the shared evolutionary history of Arthropods 🌊🦐🧠 Full article link below ⬇️ https://marinemadness.blog/2020/03/11/the-surprising-similarities-in-shrimp-insect-brains-and-why-it-matters/ #shrimp #brains #insects #arthropods #crustaceans #behaviour #evolution #discovery #research #oceans #marinelife #uwphotography
Sharks are incredibly misunderstood & unnecessarily feared creatures. New guest writer Janey Sellars explores how over sensationalism in the media has led to this & explains how her research into the subject in Queensland has revealed the problem is only getting worse 🌊🦈 Full guest submissions below ⬇️ https://marinemadness.blog/2020/03/07/friends-or-foes-the-medias-portrayal-of-sharks-the-influence-on-human-perspectives/ #sharks #sharkattack #media #hype #sensationalism #research #perspectives #marinelife #oceans #uwphotography