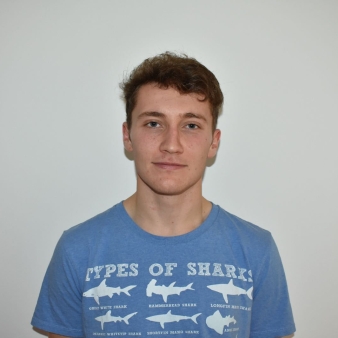 Since a young age I have been fascinated with science, wildlife and exploration. I was lucky enough to learn how to SCUBA dive at an early age and was amazed at the expansive and vibrant world I found hiding beneath the waves. It inspired me to study Marine Biology which I did at the University of Exeter (Penryn campus) graduating in the summer of 2018. During my time at university I not only learned about the weird and wonderful marine creatures that occupy our oceans, but also about the threats that face them on a daily basis. My lecturers included researchers who were providing the data that contributes to conservation efforts to protect key species and habitats and I was amazed by how many human caused issues were plaguing our oceans. I want to help highlight some of these issues as well as well inspire people to care about and help protect marine life.

As well as Marine Madness I have also written articles for Sevenseas Media, Ocean Oculus, Make The Ocean Great Again, Naturevolve, Sea Voice News & The Marine Biologist. To keep up with my work  follow me on twitter @harryjpbaker.

Hannah Schartmann – A marine biologist’s dream: Spotting dolphins in the wild, observing and protecting them

Rhodri Irranca-Davies – Coding in the deep: the past, present & future of deep-learning in the field of benthic ecology

Janey Sellars – Friends or foes? The media’s portrayal of sharks & the influence on human perspectives

Eleanor Gilbert – Assisted evolution: is meddling with corals the key to their survival?

This is one of the many seahorses that live in Sweetings Pond, a saltwater lake found on the island of Eleuthera in the Bahamas. The seahorses here are the most densely populated in the world & they are also slowly adapting to their unique environment to become their own unique species 🌊🏝🇧🇸 Find out more via link below ⬇️ https://marinemadness.blog/2020/03/21/the-secretive-seahorses-hiding-in-a-bahamian-lake/ #seahorses #lake #eleuthera #bahamas #island #population #adaptation #evolution #oceans #marinelife #biology #uwphotography
These are the suckers from the arm of a giant squid! Researchers recently sequenced the genome for this elusive deep-sea creature for the first time. It is hoped the new genetic blueprint will help unravel some of the biggest mysteries surrounding giant squid & other cephalopods 🌊🦑🧬 Find out more via link below ⬇️ https://marinemadness.blog/2020/03/19/secrets-revealed-as-the-giant-squid-gets-genetically-sequenced/ #giantsquid #squid #genome #sequenced #genetics #dna #cephalopods #evolution #research #deepsea #oceans #marinelife #uwphotography
Is meddling with corals the key to their survival? New guest writer @eleanora_jane21 explores the role of assisted evolution in coral reef conservation. She talks us through what it is, why it’s needed & whether or not we should really be doing it at all 🌊👩‍🔬🤿 Full article link below ⬇️ https://marinemadness.blog/2020/03/17/assisted-evolution-is-meddling-with-corals-the-key-to-their-survival/ #coral #coralreef #evolution #helpinghand #climatechange #oceanacidification #coralbleaching #research #oceans #marinelife #uwphotography
This shipwreck now supports a small coral reef and hundreds of marine species, as it slowly degrades on the seafloor. This transformation from wreck to habitat is not possible without the abundance of microbes surrounding it. New research has shown the microbial communities surrounding sink vessels are more dynamic, spatially complex & unique than previously realised 🌊⛵️⚓️ Full article link below ⬇️ https://marinemadness.blog/2020/03/13/microbes-transform-shipwrecks-into-underwater-islands/ #ships #shipwreck #deepsea #seafloor #microbes #transformation #habitat #ecology #oceans #marinelife #uwphotography
A new study into shrimp brains has found structures called ‘mushroom bodies’ that were previously believed to be unique to insects. They help the crustaceans navigate their complex 3D environments in the same way as a bee or fly. The discovery also changes what we knew about the shared evolutionary history of Arthropods 🌊🦐🧠 Full article link below ⬇️ https://marinemadness.blog/2020/03/11/the-surprising-similarities-in-shrimp-insect-brains-and-why-it-matters/ #shrimp #brains #insects #arthropods #crustaceans #behaviour #evolution #discovery #research #oceans #marinelife #uwphotography
Sharks are incredibly misunderstood & unnecessarily feared creatures. New guest writer Janey Sellars explores how over sensationalism in the media has led to this & explains how her research into the subject in Queensland has revealed the problem is only getting worse 🌊🦈 Full guest submissions below ⬇️ https://marinemadness.blog/2020/03/07/friends-or-foes-the-medias-portrayal-of-sharks-the-influence-on-human-perspectives/ #sharks #sharkattack #media #hype #sensationalism #research #perspectives #marinelife #oceans #uwphotography